Team Europe retained the Atlantic Challenge cup for the fifth year running, beating team USA 11-4 here in Treviso Italy. The best youth players from either side of the Atlantic met up for the fifth edition of this prestigious event, and they did not disappoint the fans with their performance. The score line flatters Europe a little because there were some very close matches that could have gone the other way with a bit of luck from the pool gods, but it wasn’t to be. 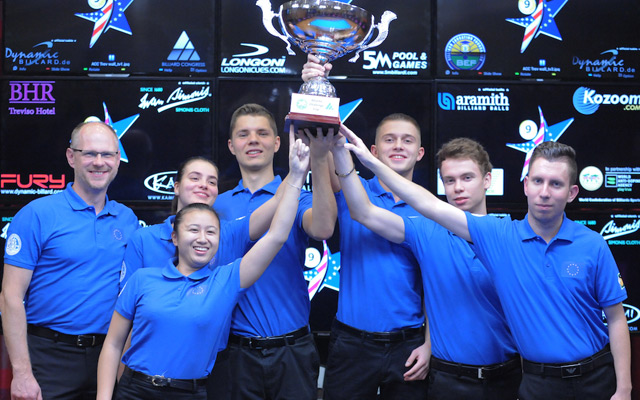 After the first day’s play left the Americans with a mountain to climb and trailing 6-1, day two was a different story. April Larson started the morning session for team USA with a great win over the strong My Nguyen 6-1. This win lifted team spirits and showed a glimmer of hope, but Europe were never going to surrender their strong lead and took the next match to lead overall 7-2. Aryana Lynch picked up another point for team USA in the afternoon session, but it was sandwiched between two wins for team Europe which put the score at 9-3 for Europe.

The Evening session loomed, and team USA needed to win two of the three scheduled matches to keep day three alive, and any hopes they had of taking the cup back home as well. It was a partnership of April Larson and Ricky Evans who took the first point of the evening and the crowd were hoping for one more point to see us into day three. Europe had other plans and made sure there is a free day to enjoy their victory and closed out the last two matches to retain the cup for a fifth successive year.

Launched by the European Pocket Billiard Federation and the Billiard Congress of America in 2015, the Atlantic Challenge Cup pits the best of youth from Europe and America in a Mosconi Cup style event in a race to 11 with a possible 21 matches in total. Six players on each team, four boys and two girls, will battle it out to see who will have the bragging rights across the Atlantic.