The European Youth squad won two out of three titles during the recent WPA World 9-Ball Championships. Moritz Neuhausen (GER) took the title in the Under 17 division while Jonas Souto (ESP) defeated Sanjin Pehlivanovic (BIH) in the final of the Under 19 division. Valeriia Trushevskaia (RUS) won the bronze medal in the girls division. 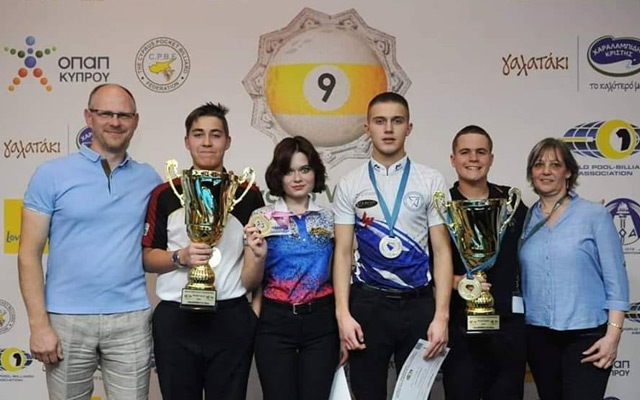 The draw was generally not in favour of the Europeans since they played each other pretty early during the event. However, the result is more than successful for team Europe. The nomination of the players took place after this year’s European Youth Championships in Veldhoven, The Netherlands. The EPBF covered all costs for players and both coaches such as travel, transfer and daily allowances. Hotel costs were covered by the organiser so all participants were able to have all costs being taken care of.

In the Under 17s, there was no real favourite before the event. Neuhausen, who took the title in the end was among the stranger players together with Joey Tate (USA) and Khalid Alghamdi (KSA). The field however was pretty levelled and saw many close results. To his horror, Neuhausen lost his first round match to Alghamdi with 6:7. He had to go to the loser’s side straight away. There, he eliminated teammate Szymon Kural 7:2 and whitewashed Haydar Capo (CAN) 7:0. In the loser’s qualification round, Neuhausen once more had a close encounter. He barely stayed alive against Dominik Jastrzab and won 7:6 to advance to the single elimination stage. There, he took down Yushi Muramatsu (JPN) 9:0. He went on and took revenge from Alghamdi, winning 9:6 in the semi-final. The final match was won by Neuhausen with 9:5 over Huan Fu (CHN).

In the Under 19s, Jonas Souto funnily enough also lost his opening match. He fell to the sharp blade of Shamir Tremus (CURACAO) with 5:9. Then he took down Stylianos Loukaides (CYP) 9:1 to then eliminate last year’s Champion Makheal Parris (USA) 9:5. The victory in his next match with 9:8 over Lukas Fracasso-Verner (USA) booked Souto a seat in the single elimination stage. He continued his quest to take down Kaiden Hunkins (USA) 11:8 and Robbie Capito (HKG) 11:9 to enter the final match against teammate Sanjin Pehlivanovic. Some favourites like Christian Froehlich and Robbie Capito started their tournament out very well but their performance went down towards the end of the eevnt. Pehlivanovic and Souto were the last two athletes standing in the Under 19 division. The final match turned into a thriller one more time with Souto having the better ending on his side. 11:9 was the final result that brought the title for the Spaniard.

Stated EPBF Youth Sports Director Tomas Brikmanis after the event: „The end result for team Europe was very good. 2 golds out of three is a fantastic result. Unfortunately, some players were not able to get medals, but this is sports. Maybe high hopes did not help Emil Andre Gangflot, My Nguen and Christoffer Lentz. There is a good potential with Alexandra Guleikova and Bojana Sarac and both polish athletes. If they get some experience, then I am sure they will win something in the future.“

The President of the EPBF, Gre Leenders, congratulated also all participants for a great job representing Europe: „Looking at the results of the EPBF delegation I can only congratulate all athletes with their achievements. 2 Gold medals (U17) & (U19), 1 silver medal (U19) and one bronze medal (Girls), is a proof of the high playing level these young athletes already have. The competition is not easy with high quality athletes from continents like Asia and North America. Also the “younger” continental bodies like Latin America and Africa presented already a good level of athletes. These results also mark that the structures, build in the 40 years history of the EPBF, are working. The work done in the national federations is very important and the seamless cooperation between the National EPBF Federations and the EPBF itself does help these young athletes to develop in the best environment. Therefore, we must also express our appreciation towards these National bodies who are responsible for this tremendous job. Congratulations also to all our EPBF members.“