The first rounds of today did not contain major upsets. Kristina Tkach (RUS), Jasmin Ouschan (AUT), Oliwia Zalewska (POL) and Marharyta Fefilava (BLR) all made their way through the winner’s round into the single knockout stage of the last 16 players. The most hiccups could probably be witnessed with Zalewska’s matches. 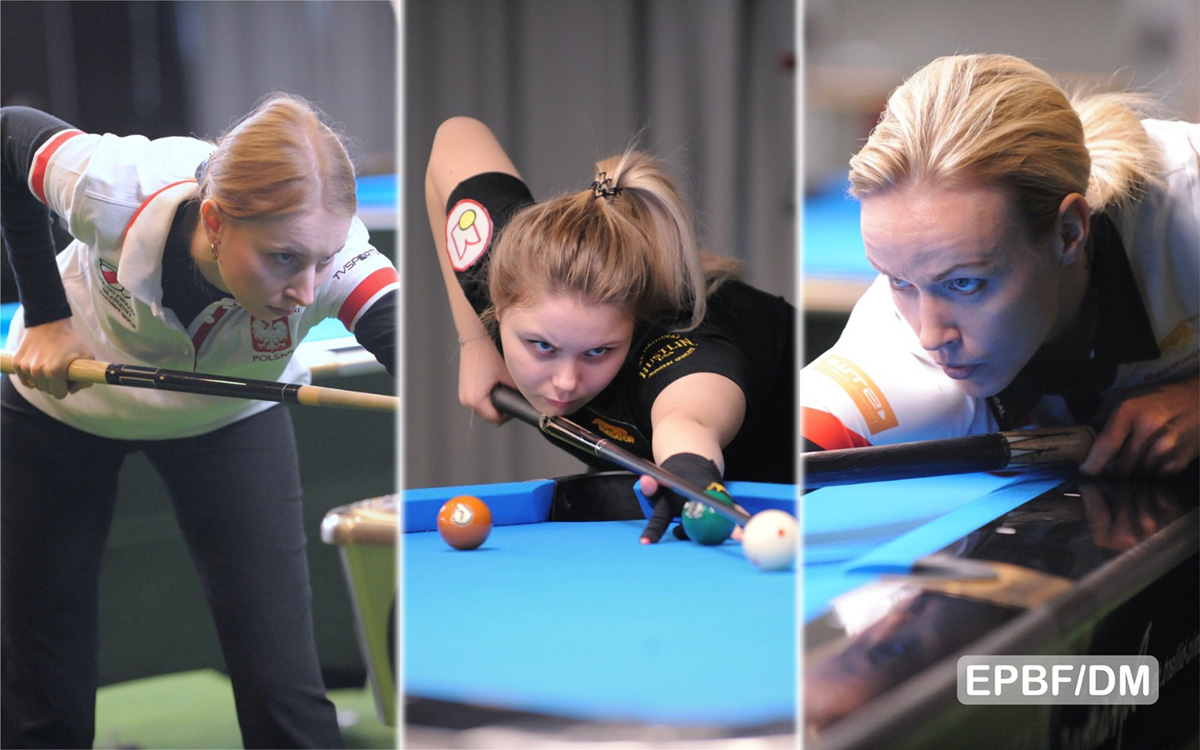 In her first match, she needed 13 racks against Lynn Pijpers (NED) to barely make it with 7:6 over the young Dutch girl. Then, in her next round match she faced Valeriia Trushevskaia (RUS). Once again, Zalewska needed 13 racks to stay alive with 7:6 in the end and make the step into the single elimination where she will meet Vania Franco (POR). The fact that Zalewska had such tough matches is even more interesting if one regards the fact that she won the last two Women Euro-Tours in Klagenfurt and Antalya in 2019 back to back. If she wants to „three-peat“ her success, she definitely needs to improve her performance.

#2 ranked player Jasmin Ouschan had smooth sailing today. She played up to her expectations and smashed Hannan Memic (BIH) and Vania Franco (POR) with 7:2 each. At no time her victory was endangered.

Ranking leader Kristina Tkach had some more work to do today. Where her first victory with 7:2 over Elise Qiu (NED) was not too difficult, she had to put up a good fight against Monika Zabek (POL) who gave her a match. In the end, Tkach remained victorious with 7:5 but she needed to keep her nerves together in order to make her way into the round of the last 16 players.

Tomorrow, the Predator Treviso Open will commence at 09:00 CET. The final match is scheduled for 15:00 CET.

Every day, up to two matches will be streamed LIVE over the EPBF Facebook page and on the EPBF YouTube channel. Check for updates and announcements.

The Predator Treviso Open 2020 were played in the Best Western Premier BHR Treviso Hotel in Treviso, Italy, on up to 21 tables which are all streamed LIVE throughout the whole event. In order to be able to follow all the action LIVE, premium membership can be obtained at www.kozoom.com. Once a premium membership is held, all events for the respective period of time can be viewed LIVE. Additionally, a huge video gallery is contained in the website.

The event was hosted by the European Governing Body for Pool, the European Pocket Billiard Federation (EPBF) and organized by International Billiard Promotion (IBP). For further information and reference please go to the federation website www.epbf.com or visit us on Facebook for regular news clips or contact our press office press@epbf.com.