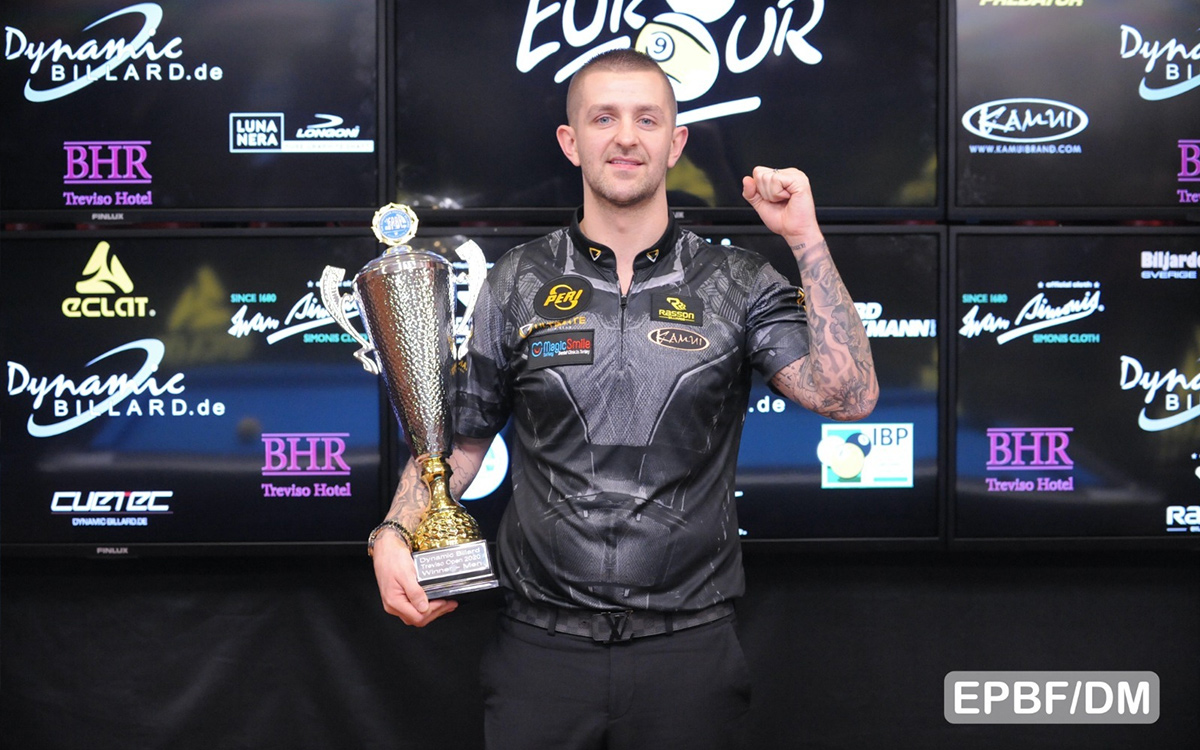 First of all, both contestants of the final match would have had deserved to be the winner tonight. But as always in sports, there can only be one winner in the end. Today, Jayson Shaw had the better end on his side. While both players took racks in turn without anyone of them being able to create a bigger advantage for himself, the match went along with high class performance. Hardly any shot was missed by Shaw or Kaci. The break shot worked also equally for both of them. In total, Shaw can be regarded as the player who played more aggressively in the match. He went for more „do-or-die“ shots and tried things instead of going for the safety option. „I had some 9:8 wins during the tournament and every time I tried and played the tactical safety game, my opponent went for the shot and either made it or left me with no position. So I changed my game and decided to be more aggressive. This worked out for me, also in the final match“, Shaw analysed his own game after the final match. In fact, Kaci was on the hill first and took some defensive decisions. He passed an illegal break shot back to Shaw and later on played a safety on the 2-ball which he could have gone for and run the rack to win. „I think Eklent took the wrong decision when he was 8:7 up“, Shaw stated,“he should have gone for the 2-ball. Sometimes this game punishes you if you do not make use of your chances.“ Instead of trying to pocket the 2- ball, Kaci went for a safety which Shaw returned and got the chance to win the 16th rack to tie the match at hill-hill. In the end, Kaci needed to come up with a good safety in rack 17 with the score being 8:8. He left a long and tough shot for Shaw who did not hesitate but fired the ball in the pocket and ran the remaining balls to win the match with 9:8 and the tournament.

That concludes the coverage of the Dynamic Billard Treviso Open 2020.

The Dynamic Billard Treviso Open 2020 were played in the Best Western Premier BHR Treviso Hotel in Treviso, Italy, on up to 21 tables which are all streamed LIVE throughout the whole event. In order to be able to follow all the action LIVE, premium membership can be obtained at www.kozoom.com. Once a premium membership is held, all events for the respective period of time can be viewed LIVE. Additionally, a huge video gallery is contained in the website.

The event was hosted by the European Governing Body for Pool, the European Pocket Billiard Federation (EPBF) and organized by International Billiard Promotion (IBP). For further information and reference please go to the federation website www.epbf.com or visit us on Facebook for regular news clips or contact our press office press@epbf.com.